The abandoned ruins of the Rocky Hill Stone Company can be found right in Rocky Hill, Connecticut within Quarry Park.

Present-day Quarry Park was the perfect place for a quarry due to the trap rock (also known as basalts) ridge which was formed some 200 million years ago. Trap rock is a dark–colored, fine–grained igneous rock formed from lava cooling quickly. Types of trap rock include basalt, gabbro, or diabase, and are characterized by their rough and jagged texture.

During the 1800s, trap rock became a sought-after material due to its strength and durability. Trap rock is typically used for crushed stone and as a paving material, but is also used in construction, such as for building foundations and as a road base. It is also used in landscaping and as an aggregate material in asphalt.

Rocky Hill Stone Company, also known as the Rocky Hill Quarry, was established in 1901. It was built several years following the completion of the Connecticut Valley Railroad which made it possible to transport goods between Hartford and Old Saybrook. The quarry was built adjacent to the railroad and right off Old Main Street in Rocky Hill, Connecticut.

The first workers at the stone company began stripping the top ledge of Rocky Hill. This was done by hand. Pieces of the trap rock ledge were knocked off, crushed up, and then loaded on trains bound for Hartford. The material could then be shipped out all over the northeast.

As time continued, the operations at the Rocky Hill Stone Company became more modernized. Dynamite was used to break off large pieces of rock instead of doing it by hand. The pieces of rock were then moved using steam shovels, dump trucks, and bulldozers. Trap rock was loaded onto train cars and also tractor-trailers to be shipped off around Connecticut, Massachusetts, Rhode Island, and New York.

What remains today of the abandoned Rocky Hill Stone Company

If you’re looking for an amazing abandoned location to explore, the Rocky Hill Stone Company ruins are amazing. Visitors are able to walk through Quarry Park and see the old quarry sites. The massive trap rock ledges are stunning and it’s amazing to think of how much stone was quarried from this area. There are also plenty of abandoned buildings that can be seen.

One of the main attractions is the remains of the Rocky Hill crusher. The crusher was used to turn large pieces of trap rock into more manageable bits. It also was the hub of transportation at the quarry. Trains and trucks would pull under the crusher and they would be loaded from above. This made things quick and easy. Today, much of the crusher building is gone, but some of the foundation and walls remain. The remains are beautiful and inspire visitors to wonder what exactly the quarry was like several decades ago.

Along with the crusher, there are several other wonderful remains. One of the structures which are in the best shape is the old compressor building. The compressor building was constructed in the late 1920s when the quarry began using steam to power some of its operations. Air compressors would be stored in this small building and they were used to power the drills working to extract the stone.

Lastly, there is another foundation for an old quarry building. It is unclear exactly what this section was used for. There is a very interesting metal chute that probably had some role in moving stone. Needless to say, it’s another fascinating section of the quarry that remains to check out.

The trail to the abandoned Rocky Hill Stone Company ruins

The trail to the Rocky Hill Stone Company ruins is easy to follow and relatively quick. Visitors can park in the Quarry Park lot located right off Old Main Street. The parking lot can hold about a dozen cars and parking is free. After parking, walk up the hill where you will find a trail map. The trail is 0.80 miles one-way or 1.6 miles out and back. It takes approximately 30 minutes to hike out and back. There is also a long loop trail, for those interested in exploring more of Quarry Park. 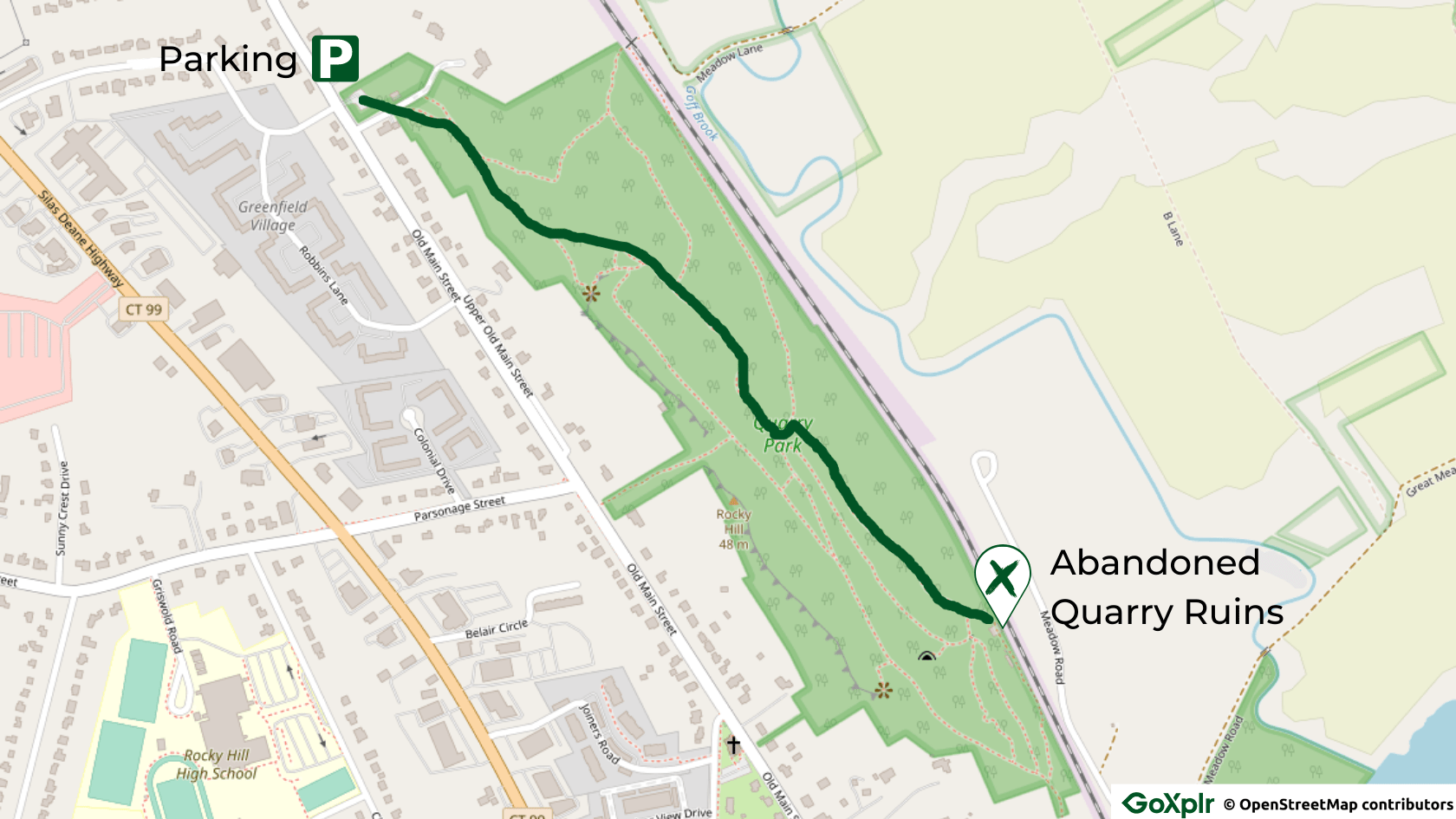 There are no reviews yet.

Be the first to review “Rocky Hill Stone Company”